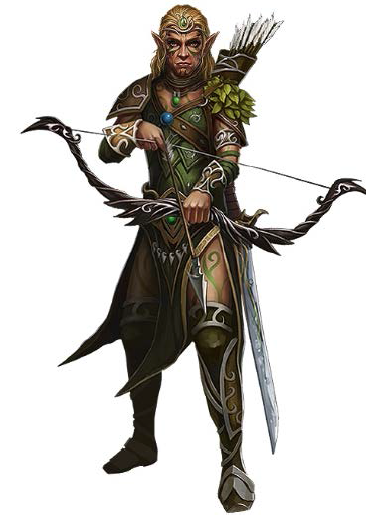 Andrew grew up in the Reaching Woods, just north of Greenest, along the southern edge of Faerûn's Sword Coast. Like most wood elves, his life was one of simplicity and harmony with nature. He learned to shoot a bow, live off the land within and around his home, and generally stay at peace and avoid anyone outside of the elves within the forest.

However, increasing gnoll raids–begun in 1459 DR by the High Overlord of Torm–systematically destroyed the wood elves in the Reaching Woods. The Overlord was incensed as the elven worship of unapproved gods, and was all too happy for an excuse to wipe out the "blight of elven blood" living in the woods.

In 1478, Andrew escaped with his mother, Gellamdis Bradgerd, to nearby Greenest. There, he and his mother were welcomed and sheltered from the gnoll forces to the north. Only two years later, Andrew's mother began to waste away, and died after nearly six months of near starvation. The healers, clerics, and even magic users of Greenest remain unclear what caused her death. However, the entire town stood with Andrew in his grief, and he developed a deep bond with the townspeople as a result.

Shortly after his mother's death, Andrew again sought out nature and the wild of the Sword Coast. In 1496 DR, he met and befriended the paladin Dazo Ennazo, and the two became loyal traveling companions. Andrew also became friends with Dazo's wife, Selena Morrowstar. The three became nearly inseparable, until Selena was kidnapped by a group of cultists–later suspected to be members of the Cult of the Dragon.

Andrew and Dazo sought the help of Dazo's order–the Order of Valian–but in a shocking decision, the head of the order exiled Dazo to death for breaking his vows, and Andrew and Dazo had to flee the order for their lives. Now, the two are searching for clues leading to their rescuing Selena, and those clues point back to Greenest–a town Andrew is dedicated to protecting.

Retrieved from "https://tyrannyofdragons.fandom.com/wiki/Andrew_Bradgerd?oldid=4120"
Community content is available under CC-BY-SA unless otherwise noted.