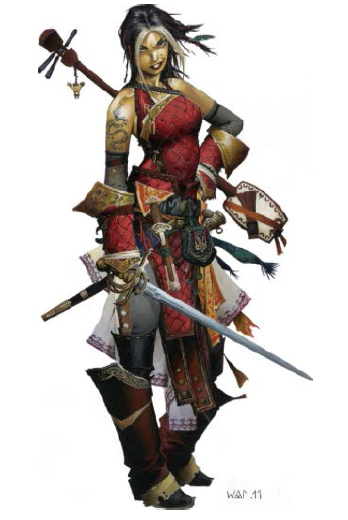 Bleu (whose last name is unknown, even to her) was raised by a traveling caravan of performers until she was nearly 18. Never sure of her parentage, she traveled with the caravan up and down the Sword Coast, in a neverending cycle, never owning much more than a few stray bits of clothing, an old balalaika, and a silver locket attached to a worn leather band.

Bleu remembers nothing of being born–and whether that birth happened on the road, in a tavern, or in a castle–and only knows the life of the wanderer. She learned to sing, dance, tell even the most boring of tales with drama and flair, and even how to fight. The performers with which she traveled stopped coddling her at 5, and by 8, she was paying her own way with her music and storytelling. By 13, she was one of the caravan's main attractions: a swashbuckling singer who could captivate an audience with a song all while dodging arrows and doing backflips. She became Bleu the Great, and towns and villages looked forward to her appearance in their large open squares.

But life on the road–especially traveling up and down the same roads–bored Bleu, who never was one to have a long attention span in the first place. In fact, the only thing that kept her with the caravan so long was her friendship with Talis, a half-elf performer with much less talent but a love for laughter and the antics that Bleu enjoyed so much. On Bleu's 18th birthday, though, Talis disappeared during a performance just outside of the small town of Greenest, on the southern edge of the Sword Coast. Bleu's caravan insisted that performers left all the time, wandering off on journeys of their own, tired of the nomadic life. Bleu–saddened and hurt by her friend's disappearance without even a goodbye–reluctantly continued on with the carvan.

In the last year, though, Bleu's doubts have grown. She is convinced now that Talis would never have left her so suddenly. She has recently left the caravan herself, determiend to find her friend. Now she travels to Greenest, hoping to discover what happened to Talis, and rejoin her best friend and return to the laughter and joy she has not felt since her 18th birthday.

Retrieved from "https://tyrannyofdragons.fandom.com/wiki/Bleu_the_Great?oldid=4115"
Community content is available under CC-BY-SA unless otherwise noted.