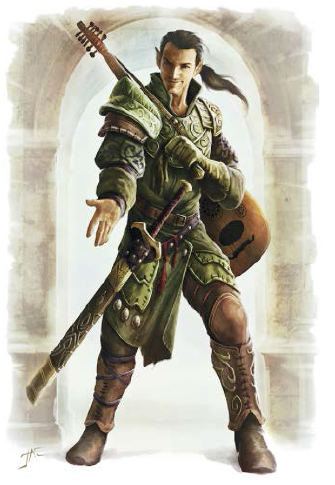 Soon after embarking on this quest, Dazo met and fell in love with an elven ranger named Selena Morrowstar. The two became romantically involved, and contrary to the vows that he took when apprenticing himself to the Order of Valian, Dazo broke his vow of chastity to be with Selena before the two were married. Selena continued to accompany Dazo on his final task, and as the two adventured, they met another companion, a human ranger named Andrew. The three spent nearly 2 years together traveling the world, becoming fast friends.

However, during their adventures, Selena was kidnapped by a group of cultists, and Andrew and Dazo were helpless to get her back. The unidentified cult is too strong for both of them, and the enemy moves away quickly–even too quickly for the nimble feet of a half-elf and a ranger. Dazo and Andrew return to the seat of the Order of Valian, and there Dazo pleads with the council for help, as well as his final induction into the Order, which would give him a group of initiates to take into battle in a rescue mission.

To Dazo's shock, the council not only denies his request, but also shames and stripes Dazo of his entire rank for loving and bedding Selena outside of wedlock. Dazo is distraught; while he acknowledges breaking his vow, in all of the known history of the Order, nobody has ever been treated so harshly for a declaration of the one virtue the Order holds so high: love. He struggles with his new dilemma: should he recant his love for Selena, leaving her to the mercy of the cultists, do penance, and eventually restory his rank in the Order, to which he's spent the last six years of his life? Should he leave the order, the values he's come to base his life upon, and pursue Selena? How can the value his Order holds so highly create such tension? Adding to his confusion, Andrew relays to Dazo a growing feeling of mistrust toward Lord Marshall, the head of the Order of Valian. Andrew feels that Lord Marshall is being dishonest in some way, and urges Dazo to leave with him and save Selena while there is still time.

The next morning, though, Dazo is brought again before the Order's council. Lord Marshall himself strips Dazo of his rank and membership in the Order permanently–something nearly unheard of in the Order's long history–and sentences Dazo to death. Even some of the other council members seem shocked, but all follow Lord Marshall's lead.

Now, Dazo is on the run with Andrew, attempting to find Selena and understand what has happened to his core beliefs, and to the Order of Valian he loves. In the last several months, Dazo has found signs pointing to the cultists that kidnapped Selena being members of the Cult of the Dragon. He has also found indications that the cult is active in Greenest, and he and Andrew are traveling there to try and find further evidence of the cult and ultimately Selena herself.

Retrieved from "https://tyrannyofdragons.fandom.com/wiki/Dazo_Ennazo?oldid=4104"
Community content is available under CC-BY-SA unless otherwise noted.