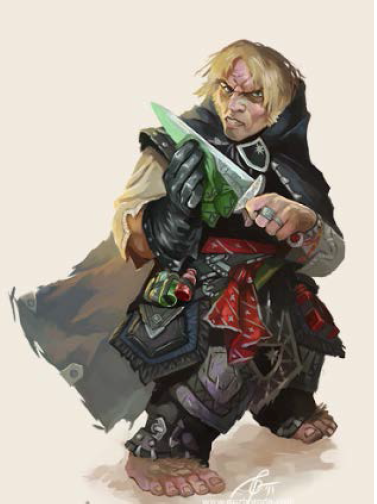 Soon after embarking on this quest, Dazo met and fell in love with an elven ranger named Selena Morrowstar. The two became romantically involved, and contrary to the vows that he took when apprenticing himself to the Order of Valian, Dazo broke his vow of chastity to be with Selena before the two were married. Selena continued to accompany Dazo on his final task, and as the two adventured, they met another companion, a human ranger named Andrew. The three spent nearly 2 years together traveling the world, becoming fast friends.

Dazo was a young Paladin (name irrelevant) is a member of the Order of Valian. An ancient order, and is well respected throughout the world. The Paladin has to undergo his final stage of his training - to go out into the world, and to become wise in the world, so when the time comes, he will be fully prepared.

Soon after embarking on his final quest, he meets and falls in love with an Elven Ranger named Selena. They become very romantically involved, but the Paladin breaks his vow of chastity to be with her before they are wed. During his final trial, she accompanies him on his travels and they come across a Human Rogue named Zen and the three go off and have their adventures.

However, during a task the three accepted, Selena is kidnapped, and Zen and the Paladin are helpless to get her back - their foe is too strong for the both of them, and the enemy also moves away quickly. Too quickly even for the nimble feet of Zen.

The two then go to the seat of the Order of Valian, and there the Paladin pleads his case to the council. Unfortunately, not only do the council deny his request, but is shamed and stripped of his rank for his love for someone out of wedlock. To the Paladin, this seems odd, because while it is slightly unbecoming, in all the history of the Order, none has ever been so treated for their declaration of the one virtue they uphold above all else: love.

This seems strange, and the Paladin must make a choice; to recant his love, and after some penance, his rank will be restored, or does he leave the order, and persue the one his heart belongs to?

While in holding, Zen came across some information about his Lord Marshall (the head of the order) which is unbecoming, and urges the Paladin to escape and save Selena while they still have a chance.

But, the next day, the Paladin is brought before the council, and the Lord Marshall, now known to the Paladin to be corrupt (and thus the order is now corrupt), exiles the Paladin from the Order, and is disgraced indefinitely. He is sentenced to death.

Retrieved from "https://tyrannyofdragons.fandom.com/wiki/Dazo_Ennazo?oldid=4102"
Community content is available under CC-BY-SA unless otherwise noted.